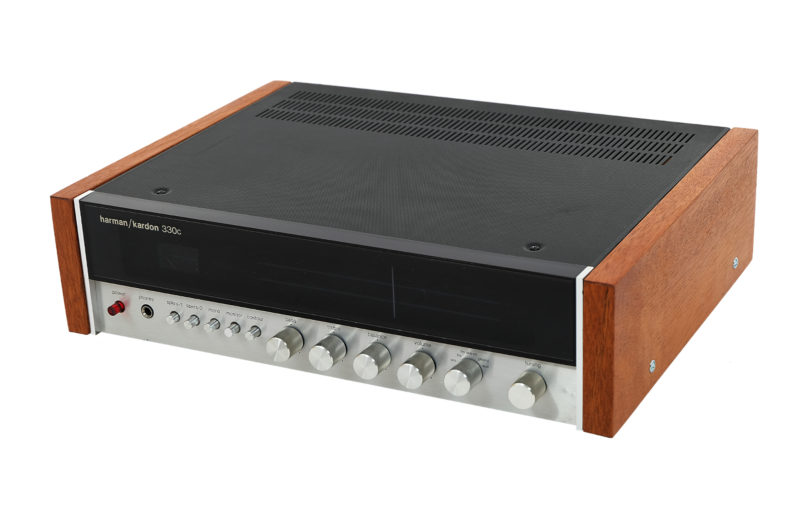 TURN DOWN THE VOLUME POTENTIOMETER BEFORE SWITCHING OFF THE RECEIVER!

In 1953, Dr. Sydney Harman and Bernard Kardon, after leaving the David Bogen Company (sound systems producer) founded Harman Kardon in the United States. A year later, they created the world’s first hi-fi receiver that combined an amplifier, preamplifier and tuner in a single enclosure. In 1958 – the first Harman Kardon stereo receiver was created, and the company started to produce two-channel audio equipment, while its competitors encouraged customers to buy two mono amplifiers. The beginning of the 1960s marked the launch of the Citation 3 amplifier and a new technological solution, namely the ultra-wide band.

In 1969, Harman bought a well-known speaker manufacturer – JBL. At the same time, Harman Kardon set himself the goal of creating high-quality equipment without unnecessary ‘frills’, which was reflected in the 330 series of receivers produced in 1968-1979. However, after being appointed US Deputy Secretary of Commerce, Harman had to sell the company to Beatrice Foods for $ 100 million.

It wasn’t until 1985 that the founder managed to buy back all companies that were part of Harman International before 1976. In the years 1999-2007, Harman Kardon focused on the development of digital audio products by creating technologically advanced solutions. In 2017, 10 years after 88-year-old Harman had retired, Samsung announced the acquisition of Harman International for $ 8 billion.

The classic series of 330 (330, 330A, 330B and 330C) receivers produced in 1968-1979 is the quintessence of the Harman Kardon design philosophy – a basic transistor stereo receiver without unnecessary ‘frills’, yet providing the highest quality of sound. This approach is also reflected in the beautiful, simple design – a large glass black display with a scale backlit in green and a smaller silver front panel with simple tuning knobs.

The enclosure has been completely renovated, the potentiometers are in perfect condition. New side boards from doussie wood create an elegant look. The device has been reviewed and serviced.