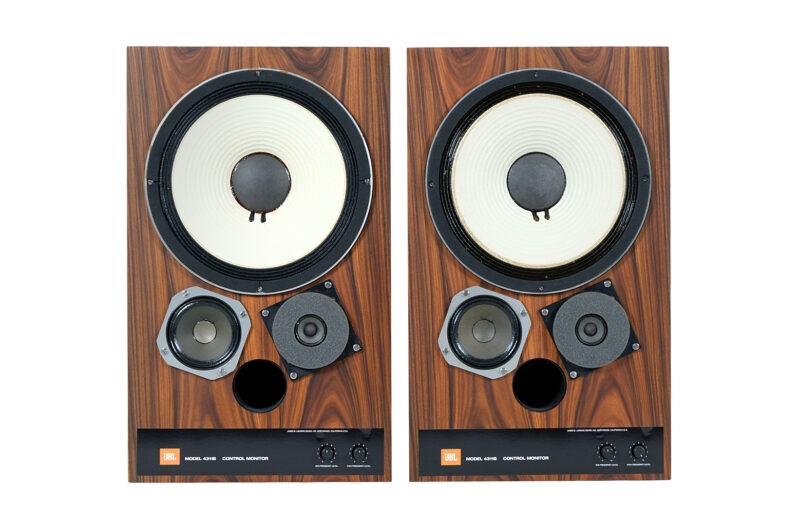 JBL 4311B speakers. Classic Vintage. Fully revitalized.
The set is 100% functional, the speakers are in perfect condition.

In 1928, James Bullough Lansing, an electrical engineer at Bell Telephone Laboratories, designed the sound system for “The Jazz Singer”, the world’s first sound film to be shown in Hollywood. In 1946 he founded the company James B. Lansing Sound Inc. (later the name was shortened to JBL), which began to specialize in home audio equipment. In 1950, the legendary woofer was launched and became the basis of all JBL technology.

In the mid-1950s, the company created the Hartsfield speaker system (known as the “dream speaker”), which set a new standard in the quality of music played at home and was produced until the mid-1980s. In the – 70s, however, JBL sold over a quarter of a million L-100 speakers that used the technology of popular monitors used in professional recording studios.

In 1983, George Lucas chose JBL to create the world’s first professional speaker system for cinemas. A year later, the company used the revolutionary titanium dome technology in home speakers, and in 1994 it received the Golden Award and Stereo Sound Component of the Year Award for excellent quality and technological innovations.

Since 1969 JBL has been part of Harman International Industries, now part of the Samsung group.

The history of some of the world’s most famous and valued JBL loudspeakers begins with the 4320 model from the 60s, which was part of the basic equipment of many sound studios. Experts, however, needed a professional, powerful, yet compact and mobile monitor. Therefore, the 4310 was created, developed in cooperation with leading recording studios and quickly becoming a sales hit. However, just as it was gaining popularity, JBL was taken over by the Jervis Corporation controlled by Sidney Harman. One of the first personnel changes was making Irving Stern the head of marketing. He recognized the success of the 4310 monitors as an excellent opportunity to conquer the consumer market. He also knew that taking the monitors to home use would require changes to the enclosure. Many people at JBL were against this idea, believing that the arrival of the 4310 on the consumer market would make it less attractive to professionals. Hence, after much discussion, it was decided to change the configuration of the 4310 while keeping the basics of the design, and this is how the JBL L100 speakers for home use were created. This decision turned out to be a massive success – the model was the best-selling speaker in the company’s history.

Meanwhile, the 4310 model was being tested, which lead to a conclusion that the unique uninterrupted treatment of flat deflectors did not provide as significant acoustic advantages as expected. Therefore, this feature was removed. In order  to increase the dispersion of high frequencies, the tweeter was replaced with a different one with a smaller diameter. Also the crossover frequencies were modified to provide a smoother response. The version was given the number 4311 and was built with a conventional recessed baffle and with an H.F. radiator raised to the acoustic plane of the woofer and the front edge of the enclosure. It was recommended by JBL as “a smooth, powerful, broadband response in a compact packaging”.

The 4311B model has been upgraded with newer versions of speakers and other types of magnets.

The enclosures have been completely revitalized. American cherry and rosewood wood adds incredible charm to the speakers. High quality finishing screws. New foams in the tweeters. New brand sticker with model marking. New potentiometers. The fronts of the speakers were painted using the automotive wet painting technique. The wood finish is Chinese oil produced from natural oils and natural turpentine-based beeswax. The wood is very pleasant to the touch.

Included are two speaker cables with a cross section of 2 × 2.5mm – length 2x5m

The set is 100% functional, the speakers are in perfect condition.