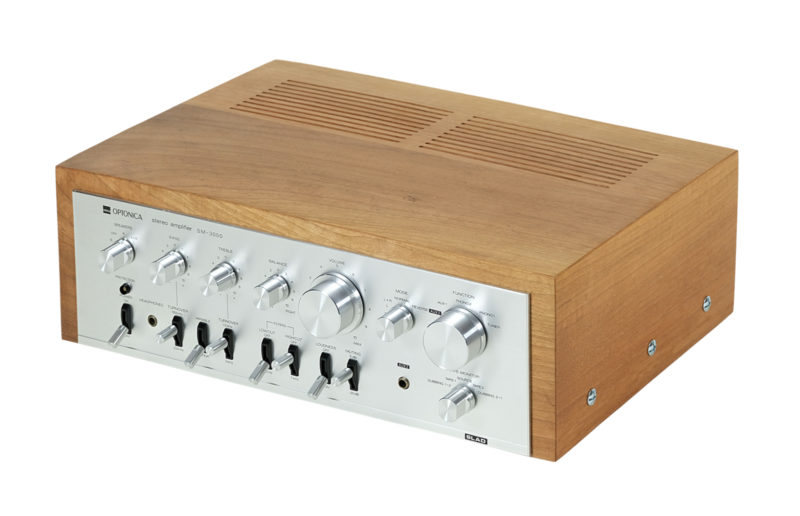 TURN DOWN THE VOLUME POTENTIOMETER BEFORE TURNING OFF THE AMPLIFIER!

In 1912, Tokuji Hayakawa established a metal workshop in Tokyo. One of his first inventions was the Ever-Sharp mechanical pencil from which the Sharp Corporation takes its name. After the business was destroyed by an earthquake in 1923, the company moved to Osaka and began designing the first generation of Japanese radio sets under the name Hayakawa Metal Works. They were launched in 1925. In 1942, the name was changed to Hayakawa Electric Industry Company. In 1953, the company began producing the first Japanese TV sets, and in 1964 it developed the world’s first transistor calculator. The company was renamed Sharp Corporation in 1970, and 6 years later it launched the Optonica brand to compete with high-end audio equipment from brands such as Sansui, Sony, Panasonic, Sanyo, Yamaha, Fisher, Technics, Pioneer, Harman Kardon and Marantz. All products offered under the name Optonica were made in Japan from the highest quality components. Optonica’s amplifiers, receivers, tape recorders and tuners quickly gained recognition on the market and a large fan base. One of the brand’s most iconic devices, however, is the RP-3636 direct-drive turntable, sought after by contemporary collectors and audiophiles for its unique Mikage Granite Stone design. After the advent of the digital era, Sharp decided to end the production under the Optonica brand in the late 1980s.

The SM-3000 amplifier is one of the iconic and greatly valued models entirely designed and manufactured in Japan. This is the real “legendary” sound of the Optonica – natural, clean and, above all, distortion-free.

The model has been equipped with a new enclosure made of American cherry wood, which gives it an elegant and refined look. The wood finish is Chinese oil produced from natural oils. The wooden enclosure is removable, as the original metal one is underneath.

Potentiometers are in perfect condition. The device has been fully reviewed and serviced