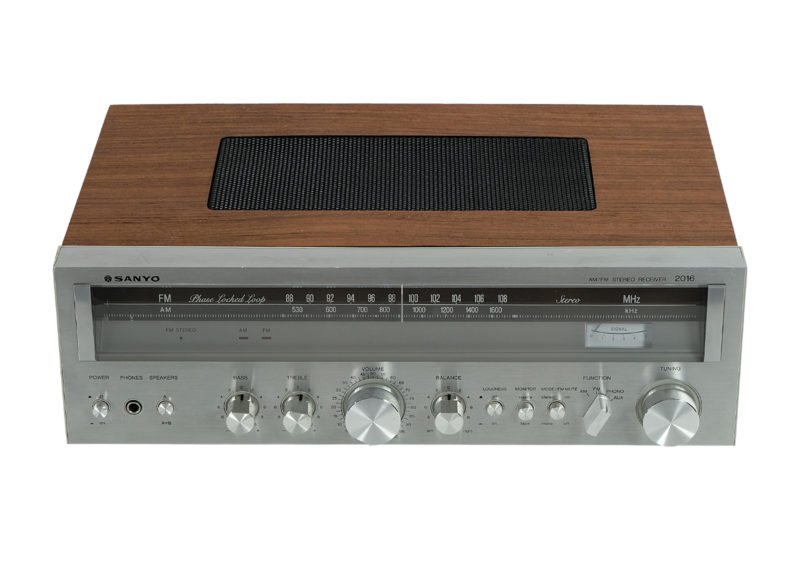 The device has been completely checked and serviced.

TURN THE VOLUME POTENTIOMETER DOWN BEFORE TURNING THE AMPLIFIER OFF!

Sanyo was founded in 1949 by Toshio Iue, the brother-in-law and also a former employee of  Konosuke Matsushita, the owner of Panasonic. The company’s name means three oceans in Japanese, referring to the founder’s ambition to sell their products worldwide, across the Atlantic, Pacific, and Indian oceans. Iue has rented from Panasonic an unused factory in Hyogo, where he began producing lamps for bicycles. From the beginning he had the ambition to break the company created by his brother-in-law, and because he did not have a strong brand, he focused on innovation.

In 1952, Sanyo released the first plastic radio. After entering the American market, where a big five: Sony, Sharp, Panasonic, Hitachi i Toshiba, had already been present for many years, Sanyo decided to cooperate with Sears and in six years it became the largest Japanese producer of TV sets in the USA. At the same time, the company introduced a European VCR to the market, becoming the leader of the British market in 1983. In addition to Sanyo video equipment, it became famous for its cassette players from the 70s and 80s, which were known for their reliability, mechanical strength and sound quality. The Korean corporations stopped the good run of the company in the 90s, and in 2009 Sanyo was taken over by the Panasonic corporation.

Sanyo 2016 is a model that is characterized by a clean and warm sound. It also has an interesting design, very characteristic for the entire 20XX line. On the silver brushed aluminum panel there is a large display with a blue-violet scale highlighted.

The case has been completely revitalized, is made of jatoba wood and looks very elegant. Wood finish is made with Chinese oil produced of natural oils. The wood feels nice to touch. The scale does not need to be re-tuned. Potentiometers are in perfect condition. Collector’s item in perfect condition! The device has been completely checked and serviced.

There are no reviews yet.